[NEW] 10 Money-Related Verbs You Should Know

40 Common Vietnamese Verbs That You Must Know (Part 1)

Acquiring vocabulary is a high priority for any language learner. The best place to start is to learn the most common words used by native speakers, especially Vietnamese VERBS.

Verbs are words that we used to talk about actions. They are a very important part to construct complete sentences, even simple ones.

The good news is, unlike many other languages, Vietnamese verbs are not conjugated. That means the verb forms stay the same regardless of the pronouns and tenses. For instance:

This lesson will introduce you to the most common and basic Vietnamese verbs, with example sentences that you can use in daily conversation.

After learning this list, you can also go to part 2 of this lesson to learn more common Verbs.

ALSO LEARN: 40 Common Vietnamese Verbs That You Must Know (Part 2)

The word “là” is equivalent to “to be” verb in English, which also includes am/is/are/was/were.

But unlike English, Vietnamese “là” is mostly used to introduce something or someone's identity or profession. For example:

When you want to describe someone or something like “she’s beautiful” or “phở is tasty”, you don’t have to use the word "là". For instance:

Meaning: to be in/at a location, or to stay

Ở is used when talking about being in/at a location. For example:

where "nhà" means home or house

You probably know that The word “Có” also means “yes”, but as a verb, it means “to have”. For example:

where “anh chị em” means siblings or brothers and sisters 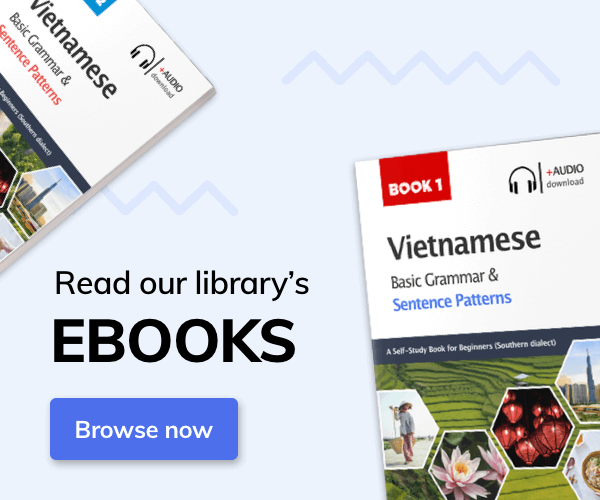 where “ngọt” means sweet, and “đồ” refers to stuff in general

Meaning: to do, to make, or to work

The word “làm” has many meanings, but I’ll show you the most common ones. The first meaning of “làm” is “To do”

Bạn đang làm gì?
“What are you doing?” (literally “You are doing what?”)

The second meaning of “làm” is To make

where “đồ ăn” means food, “cho ảnh” means for him

Another meaning of “làm” is to work. The word to work in Vietnamese, can either be “làm” or “làm việc". For example:

where “chỗ” refers to a place in general, “chỗ đó” means that place

Meaning: to speak or to say

where “tiếng Việt” refers to the Vietnamese language, and “một chút” means a little, a bit

Meaning: to hear, to listen

where “rõ” means clear or clearly

The word “cay” refers to something spicy.

Related
How to say Colors in Vietnamese - with Video and Examples

Meaning: to take or to get

where “cái này” means this one

“Sắp” refers to something that is about to happen.

Meaning: to come to, to arrive

The words “Tới” and “đến” have the same meanings, and they can be used interchangeably.

The word “sẽ” is a tense marker that we place before a verb, to describe a future action if the context is not clear enough.

"quần áo" means "clothes".
"giảm giá" can be a verb "to reduce the price". In this sentence, it is an adjective which refers to "discounted price" or "reduced price".

where "cửa hàng" refers to a store or a shop, and “mắc” means “expensive".

In Northern dialect, people would use the word “đắt” instead of "mắc" for saying “expensive”

Related
40 Common Vietnamese Verbs That You Must Know (Part 2)

Meanings: to use, to take food/drink/medicine

The first meaning of dùng is “to use”

where “để làm gì?” literally means “to do what?” or simply “what for?”

The second meaning of “dùng” is “to take” as in taking food, drink or medicine

Meanings: to give, to let and to put

Here’s an example of “to give”

The second meaning of “cho” is “to let”

where “tại sao” means “why”

Then we have the third meaning of “cho” which is “to put”. You can also say cho something vào, which means “to put something in”

Meaning: to ask, to inquire

Meaning: to look at

When “gì” is used with a negative form of a verb, it would have the meaning of “anything”. For example:

Related
Speak Better with These 15 Sentence Patterns in Vietnamese

This is a powerful verb to know because it has three common meanings: to see, to feel, and to find.

The first meaning of “thấy” is “to see”.

Earlier, we’ve learned that the word nhìn means “to look at”. Now we have the word thấy or nhìn thấy both mean “to see something with your eyes”. For example:

where “siêu thị” refers to “supermarket”, and "khuyến mãi” refers to the “sales promotion”

The second meaning of “thấy” is “to feel”. You can either say thấy or cảm thấy. For example:

where “sáng nay” means “this morning”, and “mệt” means “tired” or “tiring”

The third meaning of “thấy” is “to find” in terms of thinking or feeling a particular way, about someone or something.

where “khoe khoang” means “to brag” or “to boast”

Meanings: to watch, to view something attentively

The second meaning of “coi” is “to bring your eyes and your attention on something”. For example:

Related
How to say different Face Parts in Vietnamese

Loving the content? Support me with a Coffee ❤️

Buy Me a Coffee